My name is Nathan Connell and I am a systems-based classical hematologist at the Brigham and Women’s Hospital and Harvard Medical School in Boston. I’m pleased to be able to share this Clot Chronicle for the North American Thrombosis Forum discussing some key abstracts presented at the recent American Society of Hematology meeting.

In Abstract 176, a team, including investigators from Baylor College of Medicine, Harris Health System, the University of Texas MD Anderson Cancer Center, the University of Washington, and the Ottawa described the impact of race and ethnicity on cancer-associated thrombosis among underserved patient populations.

Over 9,000 cancer patients were included in the study, and most, over 75%, were uninsured. 832 patients developed thrombosis within one year, and there was a high incidence of cancer-associated thrombosis at 11 events per 100 person years, which is higher than rates reported in contemporary cancer registries in Europe.

Incidentally, despite adjusting for patient, cancer, and treatment-specific confounders, the incidence of cancer-associated thrombosis was lower in Hispanic as well as Asian and Pacific Islander patients as compared to non-Hispanic White or non-Hispanic Black patients. It is important, however, to understand that race is a social construct, and that demographic data are often heavily confounded or inaccurately reported in administrative databases.

In Abstract 590, Dr. Lauren Merz from Brigham and Women’s Hospital presented data on behalf of my team describing the outcomes in a population of patients who have von Willebrand disease and atrial fibrillation. As von Willebrand disease is an inherited bleeding disorder, patients are often advised to avoid anticoagulant or antiplatelet therapies. However, these are important management strategies to prevent stroke in the setting of atrial fibrillation.

Electronic medical record data were used to identify a cohort of patients with concurrent diagnoses of AFib and von Willebrand disease. And of patients with a CHA2DS2-VASc score of 2 or more, only 57% were ever prescribed anticoagulation. And the rate of major bleeding was 8.9 events per 100 person years. The rate of major bleeding amongst these patients receiving both anticoagulants and antiplatelet therapies was 28 per 100 person years.

17% of patients had a stroke after their diagnosis of atrial fibrillation, and over half of these strokes occurred in patients not on anticoagulation. And these data suggest that the risk of stroke in atrial fibrillation remains significant in patients with VWD, and that shared decision making about the risks and benefits of anticoagulant and antiplatelet therapy is necessary.

In Abstract 668, investigators from the Sorbonne and Brigham and Women’s Hospital/Harvard Medical School described results of an updated meta-analysis comparing direct oral anticoagulants to low-molecular-weight heparin for the treatment of cancer-associated thrombosis. Six randomized controlled trials compared the efficacy and safety of DOACs versus low-molecular-weight heparin across nearly 3,700 patients with acute VTE.

Risk recurrent VTE was significantly lower with the DOACs than with low-molecular-weight heparin. And major bleeding was not significantly different between the two groups, although clinically relevant nonmajor bleeding was higher in DOAC patients. These data further support emerging national and international guidelines on the use of DOAC therapy in patients with cancer-associated thrombosis.

In Abstract 3230, investigators from the University of Perugia, as well as colleagues at other institutions in Italy, described data from the COPE study, a prospective, noninterventional study in patients with acute symptomatic pulmonary embolism. Among nearly 5,000 patients entering the emergency department for pulmonary embolism, 1% were managed as outpatients, and another 6% by short-term observation. For those admitted to the hospital, the median duration of length of stay was 7 days.

Finally, of note, there was a special education session on the ASH guidelines for venous thromboembolism, including COVID-19 and VTE, thrombophilia, and an adaptation of the VTE guidelines for Latin America.

For thrombophilia, there was a discussion about the forthcoming guideline publication, and this was controversial given that modeling suggested clinicians should test for thrombophilia in certain situations that are uncommon, for instance, in patients with malignancy without a prior diagnosis of VTE, or those with hormonally provoked VTE, such as estrogen. Guidelines for VTE in Latin America included clinical questions involving initial management as well as secondary prevention, use of D-dimers, prognostic scores, length of anticoagulation, the dose of DOAC, and the resumption of anticoagulation after major bleeding.

Overall, there were numerous abstracts relevant to the thrombosis community presented at the 2021 American Society of Hematology meeting. And we look forward to the subsequent peer-reviewed publications with more detail on how these studies might change practice in the future.

And thank you for joining us for Clot Chronicles. 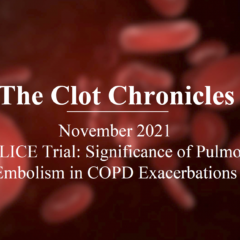