Melissa is a mother to two beautiful children, a loving wife, and a dedicated professional. After experiencing a stroke, SCAD, and pulmonary embolism (PE), Melissa became a regular attendee of NATF’s Blood Clot Support Group.

Here is her story:

Can you tell me about your health complications?

I’ve had several major health challenges in the past about 8 or 9 years, all of which have been extremely challenging to get through physically and emotionally.

I was pretty healthy until 2008. I gave birth to a healthy baby girl and 9 days after that I had a very bad headache, which was pretty much my only symptom. I went to the hospital, and I was diagnosed with a vertebral artery dissection, which is a tear in my vertebral artery in my neck. They were able to stop it. I was put on medication for it and, luckily, I didn’t have to have surgery or anything.

Fast forward to 2015. I had another successful pregnancy, with no complications during the pregnancy. When my daughter was 3 weeks old, we were at the mall Christmas shopping. I had this feeling come over me, and I knew something was wrong.

They took me to the nearest emergency room and diagnosed me with a SCAD, a spontaneous coronary artery dissection. After that, I did cardiac rehab, and I’m now on several medications.

In January of 2017, I was at work and noticed I was just a little bit short of breath. Nothing worth worrying about, I thought. So, I called my primary care doctor, just to ask, and she said, “You know what, with your history, you should probably go to the emergency room and check it out.”

So, I went to the emergency room and they did all sorts of tests, which revealed I had several unprovoked pulmonary embolisms.

Did you have any risk factors for PE?

No. I hadn’t been on a long plane ride. I hadn’t been traveling. I didn’t sit long hours at a desk. So, there were really no risk factors to answer why it would happen. That’s another emotional toll that definitely affected me. I’m having all these major medical problems, and I needed somebody to talk to.

Tell me more about the emotional toll that your health problems caused.

The biggest emotional toll that the PE diagnosis had on me was just the unknown. I was already on a low dose aspirin. This wasn’t supposed to happen to me. Obviously, my medication was not correct. Obviously, something else was going on.

So, that was definitely hard. I have two small children that I need to worry about. I work. I have a family. I had a lot of questions: Should I be worried? Is this going to happen to me again? What caused it?

I hate to think of it as the sky is falling but I had already had several major medical events and now this. It definitely took an emotional toll.

How did the NATF Blood Clot Support Group help and how did you get connected with it?

I was seeing a hematologist after my PE. As I was leaving an appointment, I just happened to talk about needing a support group. My doctor’s eyes immediately lit up. She knew exactly what would be good for me. She recommended Dr. Goldhaber’s support group.

I immediately went home and signed up, and I’ve been coming every month since. It’s helped me immensely. I don’t want to sound corny, but it’s been a life changing thing for me.

There’s only so many times that you can talk to your family and your friends, but talking to people who have been through it is huge for me. There’s a lot less anxiety about it.

Melissa’s experience with the Blood Clot Support Group inspired her to start her own support group for patients with SCAD. 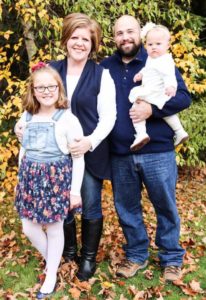 Melissa, can you tell us about the SCAD support group you started?

Because of the NATF Blood Clot Support Group, I had the idea if it helped me, it would certainly help other people. I reached out to my cardiologist to start another support group to help survivors of SCAD. We had our first meeting last week, over 50 people showed up. It was hugely successful. I explained to my cardiologist we do at the PE support group and she just kind of followed along those guidelines. It was a huge success and I’m super proud of that.

I would definitely like to say thank you to Dr. Goldhaber, Ruth, and the NATF staff for putting on support groups. I know that they must hear that a lot, but it’s been life changing to go from having a lot of anxiety and questions and just having a real hard time dealing with it, to being able to come here, even once a month. The people of NATF have been great. So I can’t thank them enough for all that they do.

And I hope that, with the new support group that I’ve began with my cardiologist, maybe someday people will think that I’ve brought something similarly great to them.

I appreciate everything that NATF does. Dr. Goldhaber has been doing support groups for 25 years, and hopefully he does it for another 25 years, because I’ll be there.